If you’ve happened to step inside The Ritz-Carlton Chicago in the past few months, you may have noticed its interior is completely transformed.

The historic hotel underwent a stunning $100 million renovation, and the interior is now brimming from floor to ceiling with Polycor’s ultra thin 1 cm GEORGIA MARBLE-PEARL GREY™ slabs. As soon as guests walk in the lobby, they’re greeted by grand 19-foot marble columns.

Katerina Ivanova, the project executive and vice president of James McHugh Construction Co., said planning is key to a successful execution of a renovation this large. 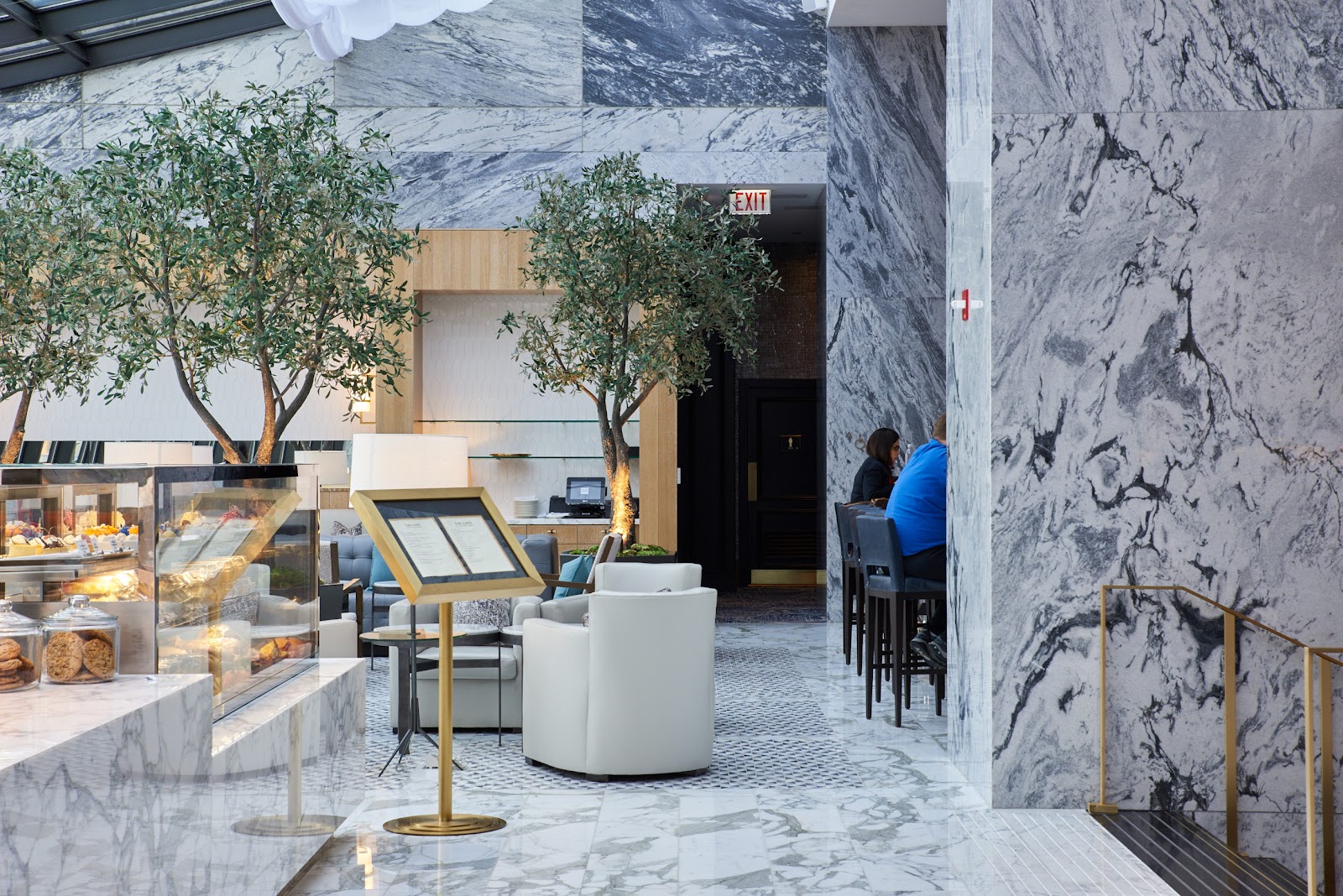 The project took over a year to plan, and six months to execute, according to Ivanova. “It was a true collaborative team effort between owner, design team and contractor.”

Sandya Dandamudi, the founder of GI Stone, was in charge of sourcing and installing the materials used for the project. She chose to work with Polycor because she wanted to pay homage to the building’s history.

When the building was originally built in 1975, Polycor’s White Cherokee and Pearl Grey marbles from their Georgia quarry were used to clad the facade of the building — she wanted to maintain a connection between the building’s exterior and interior and use marble from the same quarry. 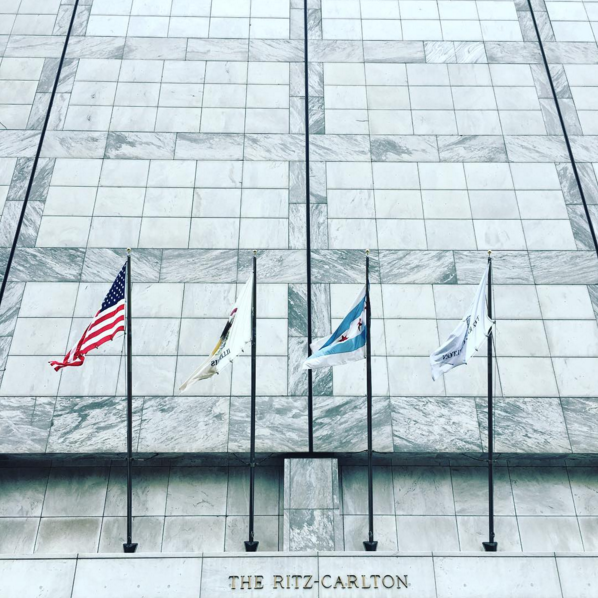 This image highlights the pattern of the marble cladding - a darker Pearl Grey border frames the lighter, more subtle White Cherokee. Both American marbles are quarried in Tate, Georgia.

Dandamudi said for a project like this, it’s important to keep in mind both the aesthetics and practicality of the space.

“In a hotel, what you’re trying to create is a feeling where you can walk in and forget everything else and be in the moment,” Dandamudi said. “It has to emotionally connect.” 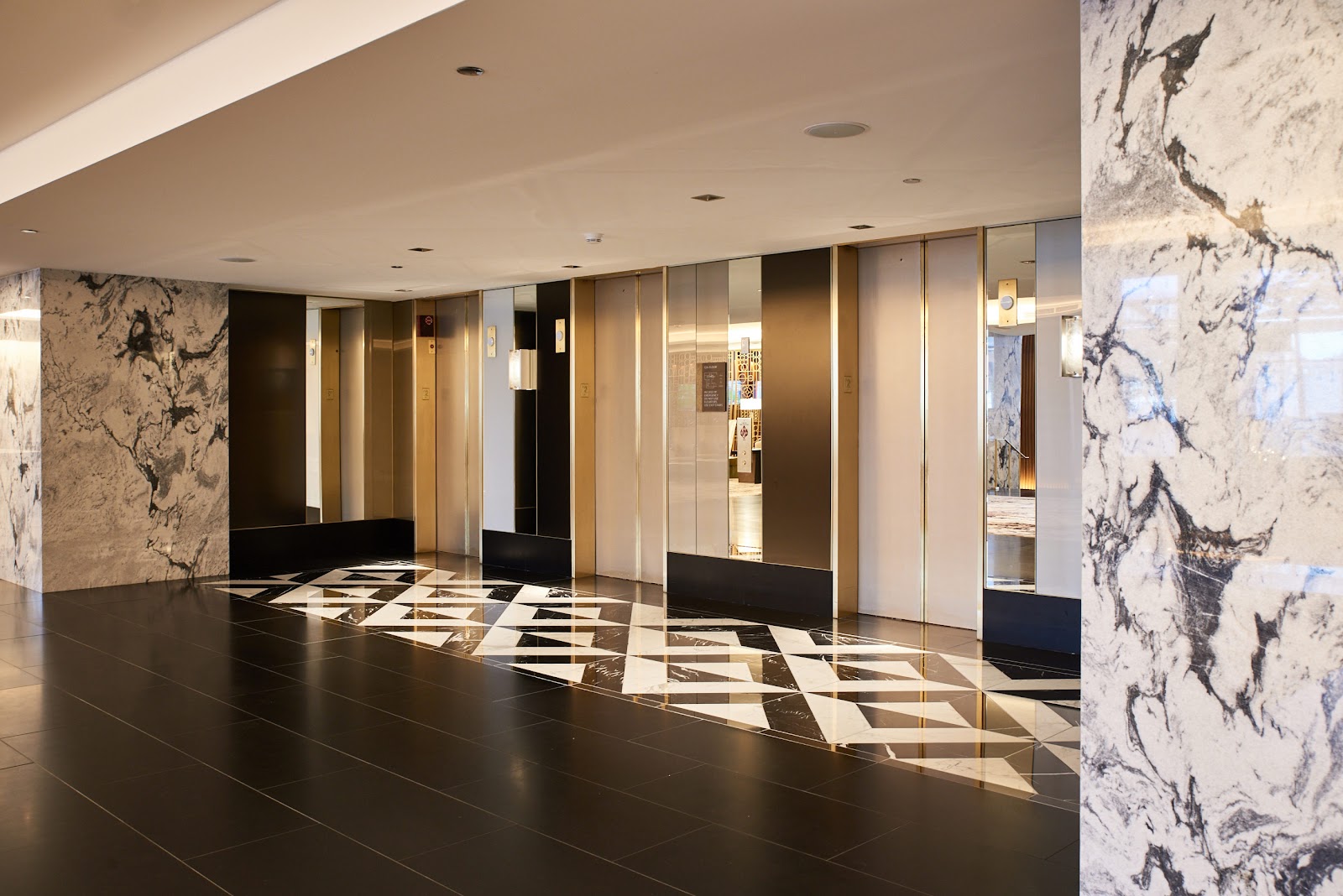 Polycor’s Regional Manager Peter Tizzone, said it was great being able to come back to the project and supply stone used from the same quarry during the initial installment of the building in the ‘70s.

“It’s getting back to the old, but also bringing in the new. It’s a cool twist.” The columns in the lobby feature two full slabs of marble stacked on top of one another. According to Tizzone, the thin 1 cm slabs made the installation process a little easier. The lightweight marble meant less labor, less time, less money. 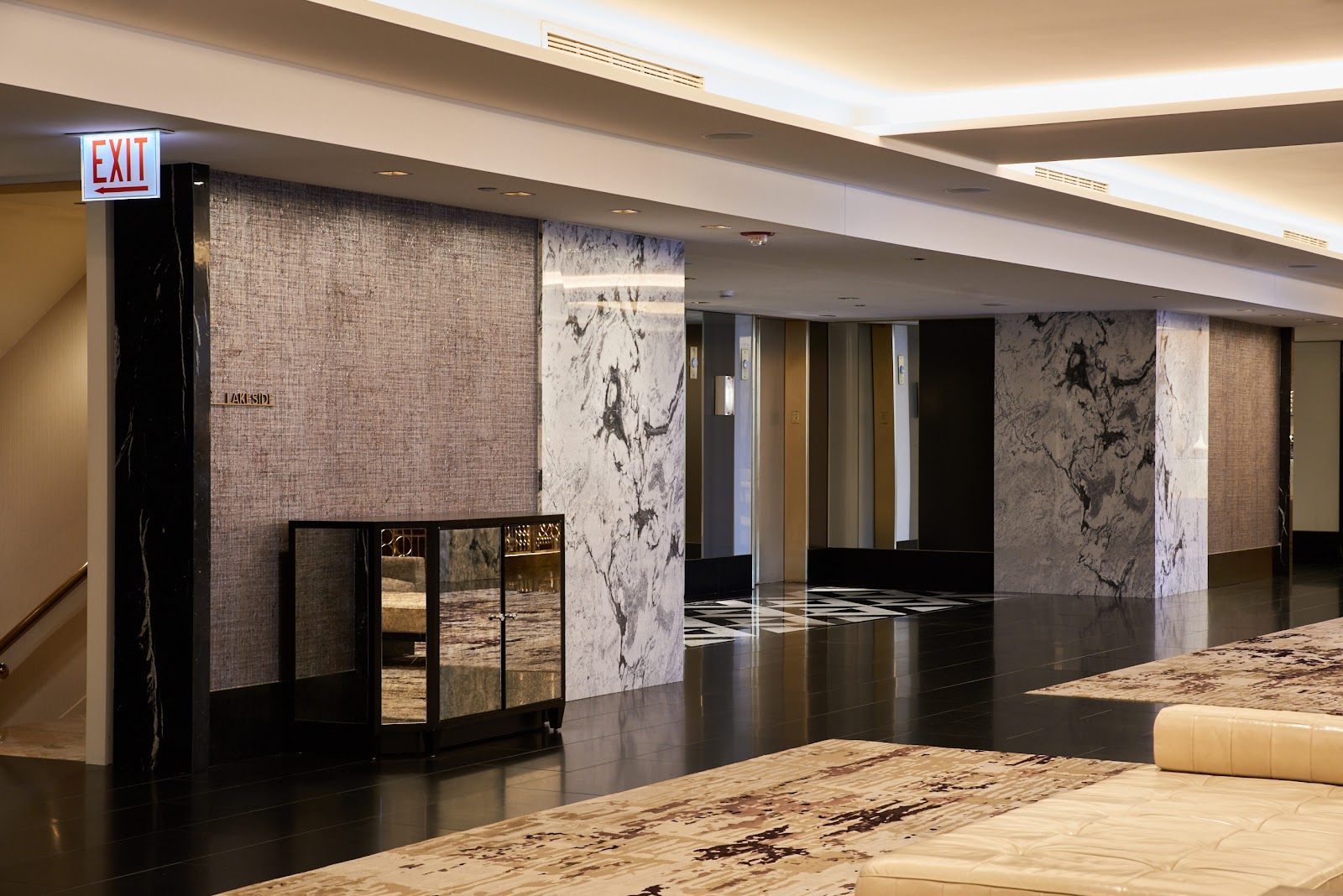 “When those slabs are turned vertically, it’s quite a significant height,” he said. “To get pieces that big into position can be very tricky, but because of the lighter weight it made it much easier.”

Polycor’s latest revolutionary technology allows it to cut natural stone to 3.8 of an inch, while adding 10 times the flexural strength.

Tizzone added that at first, clients can be hesitant to use slabs of marble that thin — they worry they’ll break under the weight. 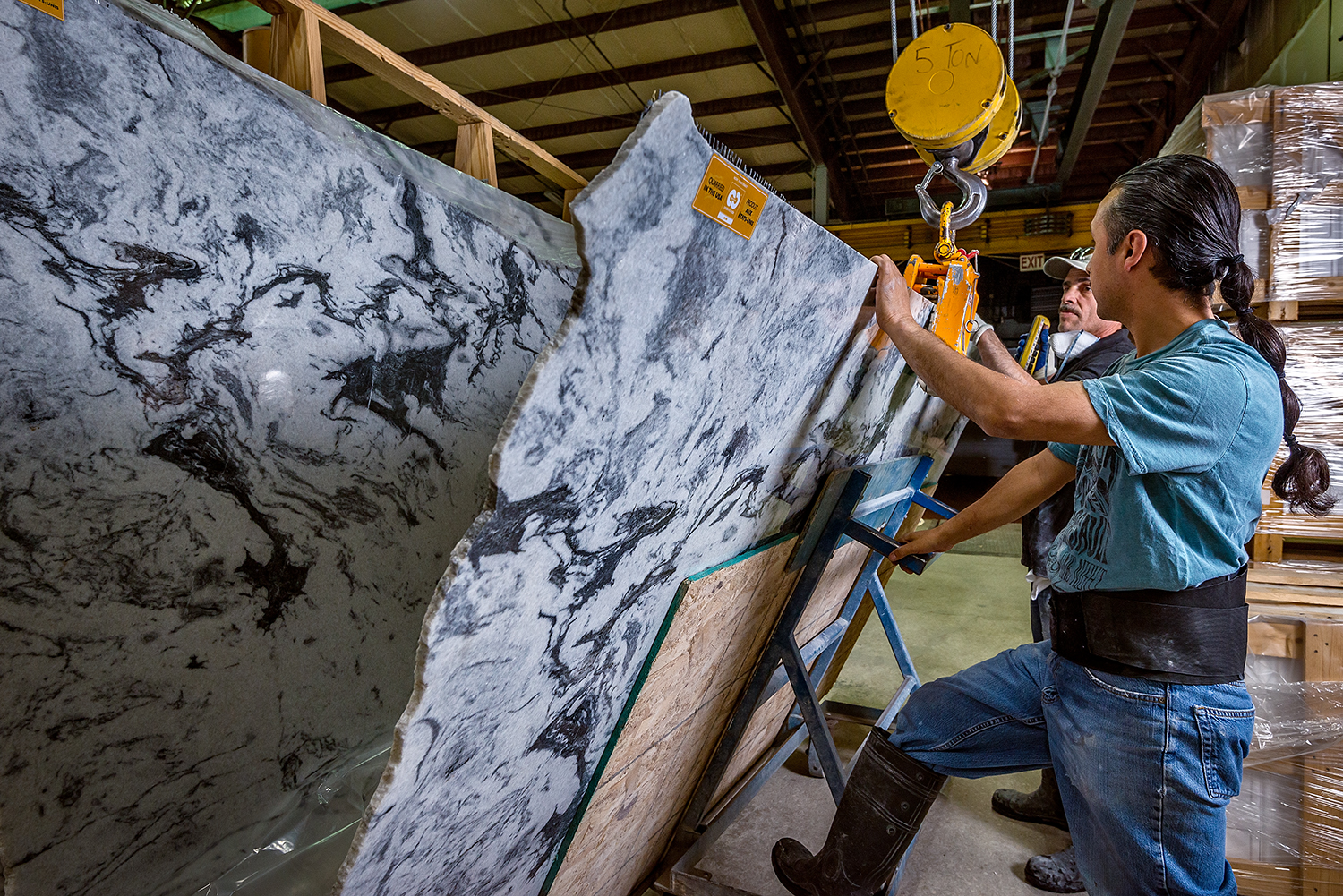 Thanks to a two-thirds reduction in weight, fabricators at GI Stone were able to handle the slabs with less man power and as a result were able to complete the job in half the time.

“When you introduce something new to the mix, there’s always hesitation,” he said. “Especially when there’s high level for something to go wrong on a big budget project like this. When marble gets thin, everybody thinks it’s going to start breaking. Then, they cut the first slab, and the second and they have this ‘ah ha’ moment where they realize this is actually doable.”

This was Dandamudi’s first time working with 1 cm stone panels — she said the installation ran smoothly.

“Polycor’s stone made the columns beautiful, significant, and light,” Dandamudi said. “They were a great partner. The columns were originally going to cost $400,000, but they ending up being (significantly less) because of the technology Polycor offered. And it made the most amazing connection between the exterior and interior.” 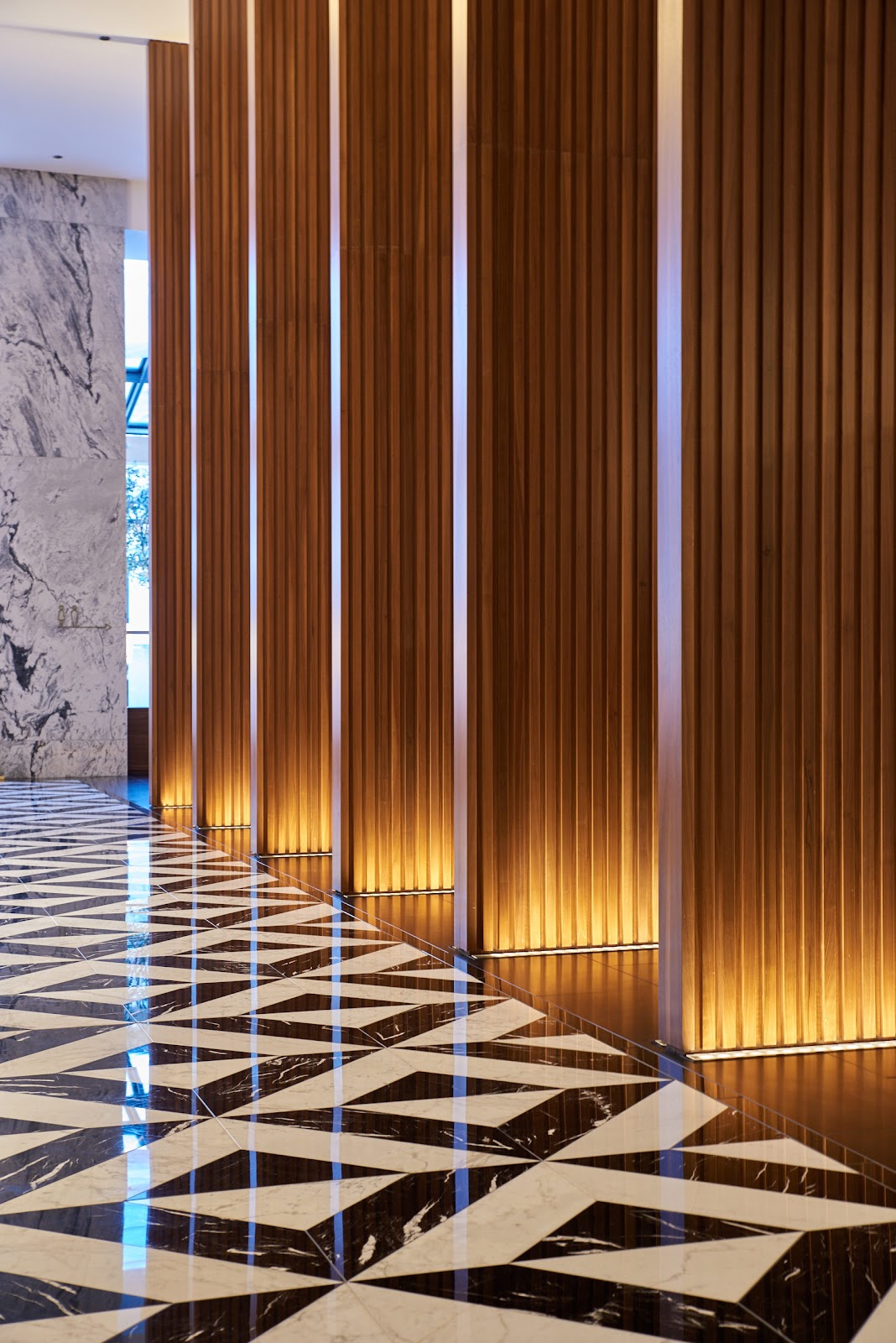 The use of 1 cm marble slabs has really taken off in residential market where designers like Brooke Wagner are incorporating the material in multiple surfaces in one home - backsplashes, waterfall islands, shower walls, fireplaces - for a cohesive look and fewer grout lines.

More and more designers and architects are opening up to the idea of implementing the thin slabs in large scale projects, like the Ritz-Carlton Chicago.

“For me and most of the team, we were awestruck,” Tizzone said. “It’s not often the marble gets featured in a very visible location like this. You install 60, 70 pieces of these slabs and walk away from it and stand back and say ‘There it is. We did it.’ To me, it’s really a testament to the product and showcases what this marble can do.”